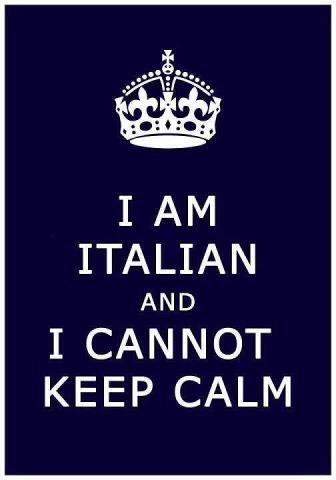 OK. Not all Italians are easily excitable, dramatic, exaggerate and gesture enthusiastically but it is not uncommon and I’m afraid to say I got the gene! I do not speak for all Italians. I speak for me and those I know.  I can also tell you honestly that the times I’ve visited Italy it was heartening  and satisfying to see all the characteristics mentioned above, playing out in lively scenes that are deemed “too much” or too dramatic here.

Outsiders can mistakenly think Italians are upset, angry or yelling but we are just showing interest in a somewhat loud way. Every man who joined our family asked the same question, “what’s wrong?” What do you mean one of us would say quizzically. “Why are you all talking and yelling at the same time?”  Yelling!?! We aren’t yelling, we would say, looking at time as if they were crazy.  My interpretation is that we care about whatever it is that has caught our attention.  I would think people would appreciate this fact! I am always suspicious of people who don’t show any emotion…what are they hiding?  What are they not saying? Eh, must be the Sicilian in me.  I just don’t understand this I’m-too-cool-to-release-an-emotion, thing.  We all have them people, let them out!

Drama. One person’s drama is another persons way of life.  When an Italian says things like: You’re killing me here, Madonna Mia! (as in virgin mother not the stroppy singer), Va fancula (don’t use this one), A Fa Napoli (go to hell or get the hell outta here), I can’t take it!  (In Brooklyn “I caaaan’t”)….It’s language meant to express the feeling they are having. They don’t necessarily mean what they say. It is the same reason I exaggerate.  If I say it’s 100 degrees in here. I don’t really think it’s 100 degrees but that’s what it feels like.  When there were two dogs in the house I would say things like , oh God, I can’t walk with 27 dogs in my way!  Again, capturing the feeeling, nothing more nothing less.  I crack up when someone tries to explain the realities to me. “Dana it’s only 72 degrees in here.”  You’re killing me!

A typical conversation between my husband and myself:

Me: “When are you going to mow the lawn?”

Again, simply underscoring the late hour. The come back is always an explanation of the actual time and how he didn’t say he would mow the lawn at 12 o’ clock. Sighhhh…message lost.

When I’m upset or excited about something, it will be expressed in hand gestures or my speech or both. One way or another it is coming out! It doesn’t matter what the reality is. So one will hear: I’ve had 100 calls today at work (20), I had to pay like $1,000 to get the car fixed ($350), There were 57 people ahead of me in the supermarket line….you get the picture.  And, when I hear something upsetting for myself or someone else, I’ll gasp or say WHAT?!!!  I think being Italian and apatheic is impossible!  Contrast this with my husband, a Brit, who would respond to the same information with “riiight” as he calmly took in the information.
I could write a post on the phrase Oh My God alone. It is used liberally and in many different situations. It is not reserved for a calamity.   There is “Oh my God!” meaning, I don’t believe it, I’m shocked or got bad news. Then there is oh-my-God which means, he or she is an idiot or something is ridiculous.  Let’s not forget  OhmyGod! which means I forgot something or someone or something is in danger and action needs to be taken. And lastly, Oh my Gaaaawd which is said as a cry (not a whine) which means I’m being stressed to the max . Usually because someone is doing my head in and/or annoying me. When this is used the receiver of the phrase will have a short amount of time to correct their offending behavior because the sender is about to blow up!  Each version is said with its own inflection and different words are stressed.  Of course Italians don’t own these three words and other nationalities have their own versions.

When I lived in England, exclamations were frowned upon. Though Brits do know how to curse and do so very well I might add, Brits do not appear to be comfortable with general outbursts as a rule, rather it seems to be a source of pride that one can keep it together in any situation. Keep Calm Carry On was a war slogan meant to remind people that they were not to freak out once bombs started dropping remember!  I once called (called mind you. I didn’t shout or scream) to my husband who was further down the supermarket aisle than I was and everyone turned around. His face went pale and I thought he was going to pass out. He looked at me as if I’d jumped into the refrigerated section and was throwing thing around like an ape.  I’m not uncouth and am appreciative of manners and etiquette.  I was innocently holding  a package of fresh mozzarella but when I saw that it had come from Italy, I had to share it and thought he’d be as happy as I was.

Ever see someone you hadn’t seen in a long time? Do you quietly approach them or call to them in whispering tones? Or do you act Italian and squeal “oh my God! I can’t believe it! Hiiiii!  How are youuuu??? Complete with delight and lots of hugs and kisses? Again, demonstrating care and interest!

I don’t know if it’s an Italian thing or a New York thing but when I get angry, I curse.  I don’t know many New Yorkers who have a problem with this. Cursing is not seen as coarse or crude, rather it is a creative way of expressing one’s self.  Cursing and degree of anger are positively correlated.  Spouses take heed!  Again, it was nice to hear people exclaiming, cursing, and generally expressing themselves in Italy without it being seen as a character flaw!

Italians talk. They talk with their mouths, their hands, their facial muscles, their shoulders, their whole bodies really.  You will always know what we think, how we feel and where you stand.  If we love you, you will be showered with affection and if we are angry you will know it, the offending situation will be addressed and it will be done with.  We are an expressive people and don’t usually hold things in.  What’s the point of having emotions and feelings if you can’t express them?  Viva Italiano!

13 responses to “On Being Italian”